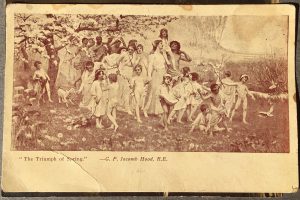 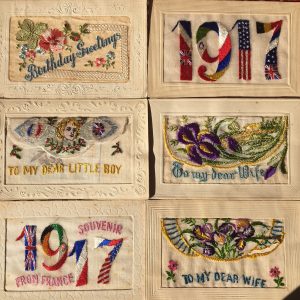 Making lace and silk-embroidered postcards and souvenirs for homesick Australian soldiers became a cottage industry for many Frenchwomen during the long, hard years of World War One.

The examples sent home by my grandfather are exquisite – cards decorated with fine hand-made lace and colourful silk embroidery. Some were in the form of envelopes on the front of the card in which could be placed tiny cards, smaller than today’s business cards, with printed messages such as Merry Christmas; To my dear Wife; To my darling Son; etc.

Other items he sent home were embroidered silk stocking covers; delicate handkerchiefs; silk-painted pillow shams and antimacassars fringed with wide lace borders that gave them an appearance of luxury. One very special cushion cover had a painting of buildings on fire and was entitled, The Burning of Arras. Obviously a commemoration of one of the great tragedies of the war.

The fine hand-made lace, the sheen of the silk and the painting of these artefacts is magnificent and the fact that they are still in existence today, as bright and beautiful as ever, is a testament to both the quality of the materials and the work of these wonderful and talented Frenchwomen of the Great War.