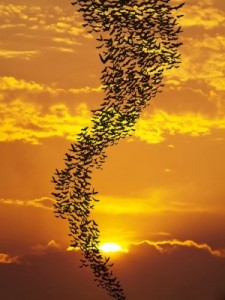 Will deadly Hendra virus become our next pandemic? With the way the virus is evolving it cannot be ruled out. History shows us that about 70% of pandemics originate in animals.

The Spanish flu that decimated the world at the end of World War I originated in pigs in a Spanish village. In its first go round in 1917 it was relatively mild. But the next bout in 1918-19 killed more people than had died during the entire war. And anyone who has made the most cursory study of WWI knows that it was absolute and utter carnage. On a scale to take the breath away. Unimaginable! And the Spanish Flu was worse!

Like every other horse owner, I don’t need any more expenses this year. Poor seasons, poor markets take a toll on all of us. But now that live Hendra virus has been found in dead fruit bats in Adelaide, I know that it is time– time to take a look at the big picture – time to vaccinate.

The fruit bat, or Flying Fox, Hendra virus’ natural host, ranges all over Australia, except for desert areas. All our horses are in danger, and by deduction, us and our dogs.

First found in 1994 in the racing stables of Vic Rail, where it killed him and 14 of his horses. Since then there have been several outbreaks:

In 2011 in Qld and NSW there were 18 outbreaks with 24 cases in horses and 1 dog. 2011 also chalked up another sinister first. The first case of Hendra in Chinchilla blowing the myth that Hendra virus would not come west of the divide and that our inland horses are safe. No horse is safe!

Now in 2013, the horrifying thing is not only that there have so far been 9 outbreaks in horses ranging from the North coast and tableland of Qld to Kempsey and Macksville in NSW, including another dreadful first, NSW’s first dog, but the virus has changed its clinical signs. Where once the signs were:

To vaccinate or not? This has been in the forefront of the news this week, with campaigns urging parents to vaccinate; and proclamations issued about child care centres and unvaccinated children.

To those of my parents’ generation, it would be unthinkable to have this debate. They all knew people who had tragically lost four, five, even all nine of their children, often within days of each other. They knew exactly what to do when each new vaccine came along.

In my own family history, an ancestor lost her husband, son and daughter from diphtheria. They all died within the space of two days. This happened in 1896.

As a farmer, I follow general animal husbandry practice to routinely vaccinate my livestock so as not to lose them from dreadful diseases such as tetanus, Black disease, blackleg and pulpy kidney. A simple vaccine, two injections given four to six weeks apart, prevents the early death of otherwise healthy young animals.

We do our best not to lose our animals from preventable disease.

How much worse if it is our children?

The anti-vaccination lobby can present frightening scenarios to parents. Unfortunately, they only reveal a very small part of the picture. They seem to have forgotten what it was that drove scientists like Pasteur and Jenner to produce vaccines: Human suffering and death!

For various reasons, lately, some parents have not been vaccinating their children. The only reason they have gotten away with it — if they have! — is because most people, since vaccines have become available, do vaccinate their children.

If you are considering not vaccinating because of a very natural fear for the safety of your child, I would say this:

Please, read the research. Don’t be put off by conspiracy theory claims. There are legitimate studies available through medical journals such as The Lancet. Weigh up the risks of vaccination and compare them to the risks of a fatal disease like diphtheria, whooping cough, tetanus or smallpox.

Remember, the only reason they are now rare is because of rigorous vaccination programs. And, sadly, whooping cough is making a big comeback. If it can do it, so can others.

Let’s do a spot-check on Diphtheria, one of the worst killers of children:

Before the 1940s this frightful disease was on top of every parent’s anxiety list. But, hey, the good news is: they found a vaccine.

Can anybody seriously tell me they would contemplate this risk for their child? If they didn’t have to?

Here are some stats from the Encyclopaedia Britannica: In 1940-44 the average annual death rate from Diphtheria in England and Wales was 1,830, dramatically reducing with immunisation, until in 1969 the figure was zero. This adds up to many thousands of families not having to grieve the loss of a child; many thousands of children who grew up to be adults and not statistics. Maybe you were one of them …

Finally, if you are still undecided, I suggest you visit any old cemetery (1880 – 1920 should do the trick) and check out the ages and heart-wrenching inscriptions on the headstones. And/or go to the death and funeral notices in the digitised old newspapers in Trove. 1896 perhaps?

You will then be able to make an informed decision.