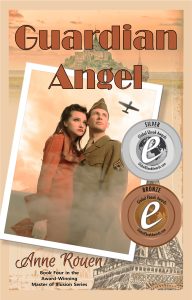 I can categorically state that 2018 has been one of the hardest year of my life because, not only did I lose one of my dearest friends, my darling Dad passed away in August. The Global Ebook awards were announced on the day of his funeral. Suffice it to say that I was in no condition to appreciate them as I ought to have done.

On our journey through life we all suffer loss. All of us lose our parents unless we die young, so I know there are a lot of people who know how I feel. Your Dad is one of the two people who gave you life, nurtured and protected you until adulthood (and afterwards, as well). You have never known life without him – until now; and it is hard.

The year began badly, with a phone call from my friend, Diane, who started me on my road to publishing the Master of Illusion series. Without her inspiration and encouragement, I would never have had the courage to even publish one book, let alone four. It was with great grief I learned that she was only expected to live a few weeks.

Guardian Angel (fourth and final book of the Master of Illusion Series) was in the process of being published and I could not delay it. I hated the thought that it was due to come out at about the same time as her life was ending. I managed to change the dedication and I thank God that she lived long enough to read how much I owed to her help and support. I am a little comforted that wherever Guardian Angel goes, her name will go with it.

So, belatedly, I would like to thank the judges and administrators of the Dan Poynter 2018 Global Ebook Awards for presenting Guardian Angel with, not one, but two awards: Silver for best Historical Literary Fiction – Modern; and Bronze for Best Ebook Cover, for which I congratulate my exceptionally talented editor and designer, Felicity Matthews of Web Etch Design and Editing. I love all the covers she has designed for me and I am thrilled that her work has now received recognition.

This makes a total of four Global Ebook Awards won by the series since 2014 and once again I would like to thank the judges and administrators for their hard work and dedication to literature. It is a fitting tribute to their founder, the late Dan Poynter.

To anyone who has suffered loss, this year, I extend my sincere sympathy. I wish all my readers, friends and followers Peace and Joy at Christmas and I hope that 2019 is a much brighter year for us all.